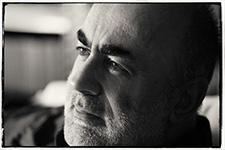 Vassilis Makris was born in Patras, Greece in 1958.

He started working as a professional photographer in 1985,
initially focusing on stage photography.
In 1987 he visited New York City and photographed various museums
and historical buildings. Drawn by the subject, he switched his specialization
to architectural photography and in 1989 started shooting private residences
and interior spaces in Los Angeles, USA. It was then that he launched his long-term
association with Greek and international publishing organizations.

During this period he also photographed concerts by Vangelis in Athens, Paris,
Rome and Rotterdam, at the artist’s request.

2002 saw the publishing of his first coffee table photo book
Houses in Greece: Under the sun (Potamos Publishers, ISBN: 960-7563-91-3),
a collection of interiors from private residences throughout Greece.
The following year he published the photo album The face of Athens
(Potamos Publishers, ISBN: 960-7563-99-9), a photographic and architectural
record of the city of Athens, in cooperation with journalist Nikos Vatopoulos,
which was published in English in 2004, followed by a second edition in 2008.

In 2009 he represented Greece in FotoWeek DC (Washington DC, USA)
with his participation in the ‘What Lies Beneath: Nature and Urban Landscape
in EU Photography’ exhibition, along with 19 other photographers from Europe.

From 2005 to 2010 he taught various courses on the principles of architectural
and industrial photography at the Leica Academy of Creative Photography in Athens.

Between 2010 and 2012 he was a member of the editorial team, chief photo editor
and photo content manager of the highly successful op-ed web site protagon.gr.

He has been a member of the Greek Union of Film, Television and Audiovisual
Technicians (ΕΤΕΚΤ-ΟΤ) since 1988, as a Still Photographer, and of PHOEBUS,
the Greek Organization for the Collective Management and Protection of the
Intellectual Property Rights of Photographers.

In 2011 he started working closely with the Onassis Cultural Centre – Athens,
a new cultural space hosting events and actions across the spectrum of the arts,
as well as the National Theater of Greece and the National Opera of Greece,
photographing show rehearsals and performances, in support of the arts and culture
of a nation in crisis.

In June 2015 he participated in the 4-day “Light Up the Night” event
at the Stavros Niarchos Park with a one-man show, presenting 16 photographs
from the “Incarnation” project, a work in progress that was completed in 2017
on the central stage of the opera house at the Stavros Niarchos Foundation Cultural Center.

In May 2016 he mounted the “Damni i colori…The making of” exhibition
at the visitors center of the Stavros Niarchos Foundation Cultural Center (SNFCC).
The photographs depict the preparatory stages of Isma Toulatou’s
“Opera and Fashion” project, offering the public an opportunity to vicariously
experience and take part in the rehearsals and backstage action of the project,
which was presented on May 19 2016 at the Greek National Opera’s Olympia Theater.

In 2017, while continuing to pursue his professional career, he returned to the
Leica Akademie Greece, where he currently teaches architectural and industrial
photography and leads workshops and masterclasses organized by the Akademie.

Copyright Note
All photographic images on this site are the Copyright of Vassilis Makris.
No photograph or digital file may be reproduced, cropped or modified
(digitally or otherwise) nor its caption altered without prior written agreement
from Vassilis Makris.

This website uses cookies to improve your experience while you navigate through the website. Out of these, the cookies that are categorized as necessary are stored on your browser as they are essential for the working of basic functionalities of the website. We also use third-party cookies that help us analyze and understand how you use this website. These cookies will be stored in your browser only with your consent. You also have the option to opt-out of these cookies. But opting out of some of these cookies may affect your browsing experience.
Necessary Always Enabled

Any cookies that may not be particularly necessary for the website to function and is used specifically to collect user personal data via analytics, ads, other embedded contents are termed as non-necessary cookies. It is mandatory to procure user consent prior to running these cookies on your website.